Charlotte Street is located in Noho, an area to the north of Oxford Street within the London Borough of Camden. Noho is bordered by Marylebone to the west, Bloomsbury to the east, Soho to the south and Camden to the north.

The area is often described as Bohemian as a result of the community of writers, artists and actors who based themselves in Fitzrovia from the inter-war years. Now a hub for the creative industries, a cosmopolitan feel has evolved with the cafés and restaurants that spill onto the pavement on lower Charlotte Street. The addition of internationally renowned boutique hotels including the Sanderson and Charlotte Street Hotel have further improved the locality. Noho is a sought after office market in its own right and has become the preferred location for many media, creative and entertainment companies.

The building benefits from being surrounded by some of london’s most popular bars, restaurants and cafés including roka, charlotte street Hotel, Hakkasan, Wahaca and the sanderson Hotel.

All properties of this agent 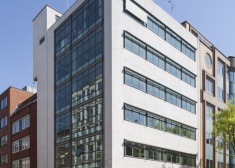 Are you really want to add office: 33 Charlotte St, Fitzrovia, W1, London to your email alerts?